History of the Jackson Municipal Band

The Jackson Municipal Band began in 1920 when the Jackson Chamber of Commerce asked Mr. A.W. Roloff to start a band. Originally called the Jackson Junior Band, the group was formed to provide positive extra-curricular activity for youths. 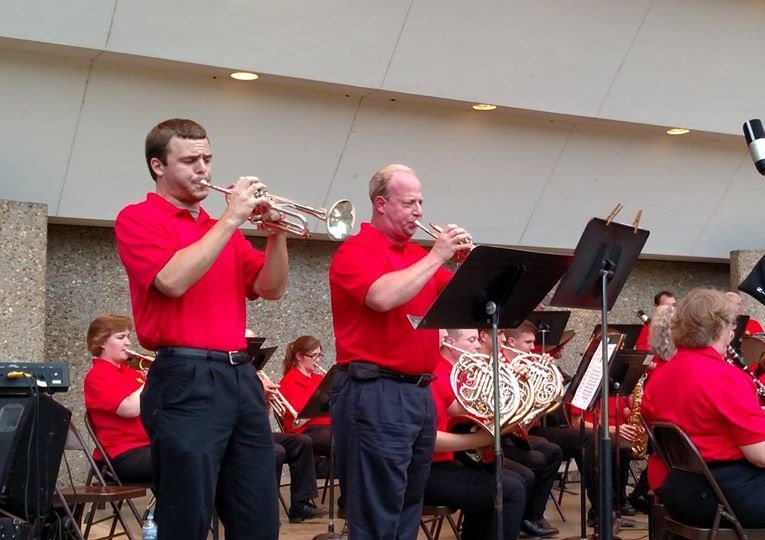 The band practiced in Mr. Roloff’s woodworking shop, using sawhorses for seats and a floor of shavings. The first two musical selections rehearsed were a march, “Captain,” and a waltz, “Rustling Leaves.” For the services of the band, the fee was $10 for home events and as much as $50 on trips.
The first engagement for a parade was the Memorial Day picnic in May of 1921 in Cape Girardeau. The parade began at the Farmers and Merchants Bank on Good Hope Street, passing to Main Street and then up Broadway to Capaha Park, which was then the location of the fairgrounds.
The first performance where band members were remunerated was the five-day concert at Homecomers in 1922, with each member receiving $5.
The gazebo on the Cape Girardeau County courthouse lawn was completed in 1932 at a cost of $1300. Mr. Roloff was instrumental in getting this stage erected, and also worked with other municipal leaders to pass a one-mill tax levy in 1923 to support the band. Uniforms were purchased in 1938, with red coats, black trousers and Sam Browne belts. 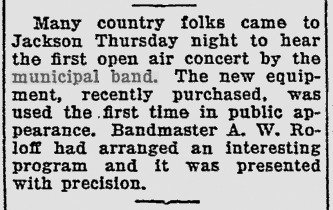 In addition to the regular concerts during the season, the band also presents several extended concerts. The extended concerts are a great opportunity to bring a picnic basket and the entire family for an enjoyable evening of great family summer entertainment. Come on out to the beautiful Jackson City Park and join the Jackson Municipal Band for the summer.

You can find us in the media here